Let’s talk about diversity, and why it’s so important to us.

At the end of 2019, the German “Game Verband” created a pledge to support diversity in games and the games industry. We’re one of many, many German studios who signed the pledge – among the big international ones like our friends at Ubisoft, Electronic Arts and other big industry names.

We’re meaning it, too. Roleplaying games especially encourage the player to create a character to embody while venturing on a journey, and with our highly flexible skill system you can already create whatever character you want. A battlemage wielding fire and blades? A necromancer butchering corpses with an axe? An animancer wearing heavy armor and letting their creations fight for them while cowering in a corner? All of these are already possible choices in the upcoming demo (oh yes, there’ll be more information on that soon, too), and many, many more.

Races are not a binary thing. Very few roleplaying games would differentiate between “human” and “not human” as choices. And if there’s already a nonbinary choice for races, we might as well include this for gender as well. 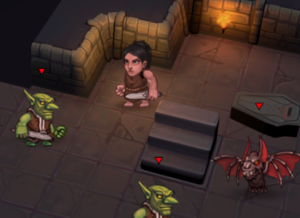 A female human wields a dagger. An adventuress following Nesera, specializing on stealth and scavenging. She knows a bit of ice magic, too, when she gets cornered by monsters and no shadow to hide in in sight. 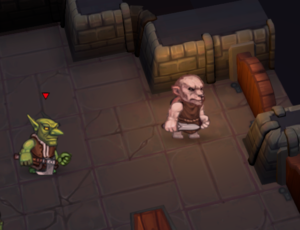 A neuter Ratling warrior also specializing in short blades. They’re deadly in its skilled hands. While it knows a bit of thievery, locked doors are still a challenge for the Ratling. Maybe one of the other creatures roaming these caverns has a key for it. 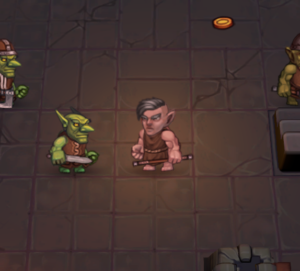 This elven mage is non-binary. They do not wish to define themselves as a particular gender, but rather celebrate their fluidity by freeing other creatures from their binary prisons by turning them into fiery magma.

Did you notice something there in the text? There’s three different genders already. And in English, this is fine and easy. We have He, She, It and They/Them (or tHeY/tHeM in case of tentacle-gendered adventurers). English is a wonderful language easily adaptable to modern gendering.

Since we’re sitting on the our first localization, let me tell you all that German is very much the opposite. In fact, the licensed grammar engine had to be updated massively to handle this – apparently we’re the first German game offering more than male, female and neutral as gender options. This causes a bit more work than expected, but it is work we’re quietly proud of.

We considered, very briefly, to take the easy way out and get rid of genders entirely and just let the players pick a face, physiology and hair-style they’re happy with. But that felt too much like giving up, and we do not shy away from design and programming challenges just because they’re complex. It helps that we’re working together with some of the best translators in the games industry.

And our slogan has always been that you can play the game the way you want – and that includes creating the character you want to play in all the possible choices you can think of.