The Joy of Dying

Sounds tough? It is. Roguelike games are for players who aren’t afraid of challenges.

“I no longer have the time to fail and completely restart games” is a response roguelike designers occasionally get to here. But we promise: While dying might seem tough, it’s actually a lot of fun in roguelikes. Because in your next game you will be able to re-use everything you learned and still play it a (mostly?) randomly generated completely new environment. Which guarantees that there is very little tedium and you instead can live through new exciting adventures. And don’t need to learn a completely new game system. Additionally will start joying this particular flavor of gaming because every action in the game turns into a much more exciting adrenaline-charged experience. Every move potentially can be your last – and as roguelike games usually are turn-based instead of real-time they tease you with having enough time for good choices… and then still killing you mercilessly. But with taste and joy! 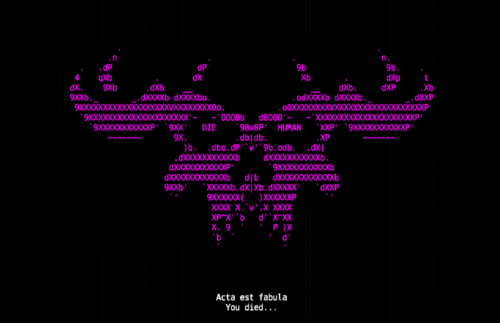 For Ultimate ADOM we’ll be going to push these limits even further… or special features like allowing you to swap minds with other beings could make you end up in the body of a slug making for an excellent dish on some others monsters palate. Or slowly be amputated bodypart by bodypart. Or being slaughtered by an animated (and agitated!) door. Or falling victim to a “Bouncing Ray of Dismemberment” spell you yourself cast. And dozens of other new ways to learn from dying. Including after falling down a stairway.