Of Skills and Trees and Forests

Designing the skill system for Ultimate ADOM was a challenge, because to be honest the skills in ADOM are a mess. Including a Bridge Building skill sounded like a good idea at the time, but please raise your hand if you used it more than once during all of your ADOM plays.

No one? Oh, you over there? You’re a brave man, sir, and we salute you.

But seriously, while some skills were regularly used and raised religiously, many did not make a difference.

Taking this into account and designing skills for ADOM the Roleplaying Game served as an inspiration for the current iteration of the skill system. Please note that everything is still experimental and may be changed, rebalanced or just entirely ditched if we figure out it’s not going to be fun.

So, what goes into a good skill system? We want you to talk about builds, discuss strategy and offer replayability. For us, this does not only mean a dwarven fighter should differ from a human fighter, but also that two human fighters can go for very different skillsets and still be effective, albeit maybe in different situations.

Yes, that means not everyone has to run around with a shield at all times anymore.

At the same time, most of us are fans of overly complex things like for example the wondrous, maddening and downright scary skill labyrinth of Path of Exile. However, getting +0.2% more damage on a certain skill when you put a skillpoint in there just doesn’t feel appealing.

Additionally, we decided against allowing everyone to become everything – a fighter might learn a bit of magic, but she will never be as proficient in wielding the higher arcana as a Wizard.

So, to reiterate – we want choices to matter, we want vastly different specializations from the very beginning, and we want you to feel that levelling is a meaningful progress.

However, we also want to get rid of decision paralysis. While we want you to obsess over and discuss builds with other players, we also want you to start playing the game instead of spending hours of research on what’s the best approach. Staying true to the rogue-like formula, it’s about experimenting and exploring.

We like to believe we found a happy medium with what we have in mind, so without further ado, let us talk about what the skill system in Ultimate ADOM will actually look like.

First, a word of reassurance: As a player, you will never get to see the full forest. I will show you our design anyway, because it’ll make things a lot easier to explain. 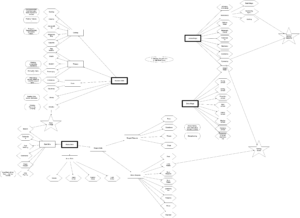 What you see here is a preliminary listing of categories and skill trees we will have in Ultimate ADOM. Again, please note that nothing about this is final, but feel free to comment which combinations of skills sound particularly cool to you.

Each of these endpoints is a skill-tree which needs to be unlocked and can then be advanced. Unlocking Long Blades, for example, will allow your character to become more proficient with wielding swords and similar weapons.

Swords are very versatile weapons, so the skill-tree will not only focus on improving your damage and chances to hit, but also grant you skills that improve your parrying or even allow you to try and disarm your opponents.

A master of the Axe skill-tree will disarm opponents in a more literal sense. Unlike the mastery of swords, axe users will not focus on a balance between offense and defense, but specialize in massive damage and the cutting off of limbs – which you could then use for your necromanting Grafting skill for entertaining purposes. Mastering different weapons will reward very different playing styles.

At character creation, your character will receive a certain amount of points to unlock various skill trees, based on their class, faction and race. While a fighter might get to freely unlock four martial skill-trees and a mundane one, a Wizard might only be allowed to learn a single armor skill instead but gets to choose of several of the Arcane skill-trees. Mercenaries who joined Gilah’s faction are taught another weapon or armor skill of their choice, while lone wolves who refuse to follow any faction are more proficient at surviving on their own and can unlock another mundane skill-tree.

Once you made your selection, you will only see the skill-trees your character actually unlocked. This helps easily maintaining control and overview of your abilities.

At higher levels, you might get a chance to unlock additional skill-trees, based on your class, race, current faction… and the level of your own corruption. Giving in to the temptations of Chaos is dangerous, but can be very rewarding.

You might also find powerful and rare books, potions, sentient mentors or other items teaching you the basics of a new skill, but items or creatures of such power are usually jealously hoarded by even more powerful guardians and often come with an unexpected price.

Additionally, we will introduce so-called prestige skills. These powerful abilities will unlock when you master a combination of skill-trees. We have two examples in our skill forest overview up there: Flaming Blades is an ability unlocked by a heroine who has mastered both the Long Blades and Pyromancy, adding a significant oomph to appropriate weapon attacks, while someone mastering both the berserking combat style and athletics will get the ability to Angry Charge at distant enemies.

We aim to have a ton of these hidden abilities in the game to reward exploration and experimenting with creative skill combinations.

Thanks for reading! Let us know what kind of character you are going to want to play first in Ultimate ADOM!