Putting the magic back into magic

The magic system is one of the systems that excites me most about Ultimate ADOM besides amputations & grafting and possession (both to be covered in upcoming blog posts). If you look at ADOM’s magic system from a neutral point of view you will have to admit that it is kind of bland: there is a variety of combat spells (bolts and balls) that mostly vary by the type of elemental or energy damage they cause and (for bolts) if they bounce or not. Then there are a few healing spells, utility spells (for opening doors, etc.) and that’s about it. Somehow the excitement of magic is severely lacking here.

If you look at many other games they have similar problems: tons of combat, protection and healing spells and sometimes a few elemental creation spells to bring walls of fire, lakes of water or whatever into existence. And maybe some item enchantment spells sprinkled in. Still this is far from exciting.

So we started to wonder: What would make for a truly exciting magic system? Our answers are:

I’d like to elaborate the last two points for the rest of this blog post (more to come in later posts):

Again looking at ADOM magic used by wizards and priests basically is the same. They even share the same spell lists although the spell names differ for them. We really want to change this for Ultimate ADOM by introducing divine magic and arcane magic as magic systems with subtle differences in how you interact with them:

Combined with a hopefully more elaborate religion system (things are still in the planning stage in this area and might truly manifest only in versions after 1.0) we hope that these features will a add a lot more flavor to the spellcasting classes. 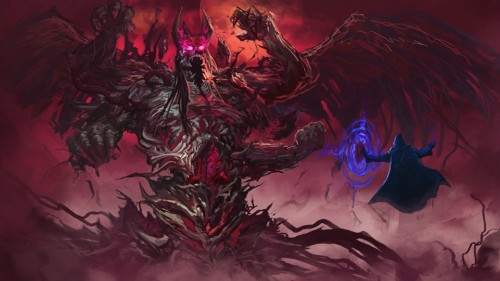 Oh, and there will be a third type of magic (“hedge magic”) providing basic spells that are shared between divine and arcane spellcasters. Basically the common stuff peasants know about from stories and rumors. These spells usually will be less powerful but beneficial in minor tricky situations.

I already used past blog posts to talk about the technical benefits of having an entity component system [ECS] (e.g. here about modding Ultimate ADOM and here about animating objects and bringing them to life). The gist always is “ECS allows for incredible flexibility”.

So it seems natural to bring this flexibility to the effects of magic. And that’s exactly what we are doing.

Internally we use “effects” as an abstraction of many things that are going to happen in Ultimate ADOM – be that the effects of traps, of special powers of magical weapons, skill applications or… spells. In ADOM all this is hard-coded complex to change stuff in the code. In Ultimate ADOM this is more like Lego our assembling a puzzle with many non-unique connection points.

What does this offer? Flexibility! E.g. think about the following applications of lego-like effects that we can assemble in (almost) any way we want:

And there is a lot more to it – magical pulses that activate other items, features or spells. Sound effects. Coincidental damage to the world. Truly flexible environmental effects (slipping on ice, lack of air in steam clouds, etc. pp.). So we have lots of plans for the magic system in Ultimate ADOM and hope to really get you excited about it!